To ensure its development, L’Oréal divides their labour into global Research and Innovation centres, a unique portfolio of brands organized by distribution channel and geographical zone, and an integrated industrial production.

L´Oréal has a very clear range of departments. The most outstanding ones are: 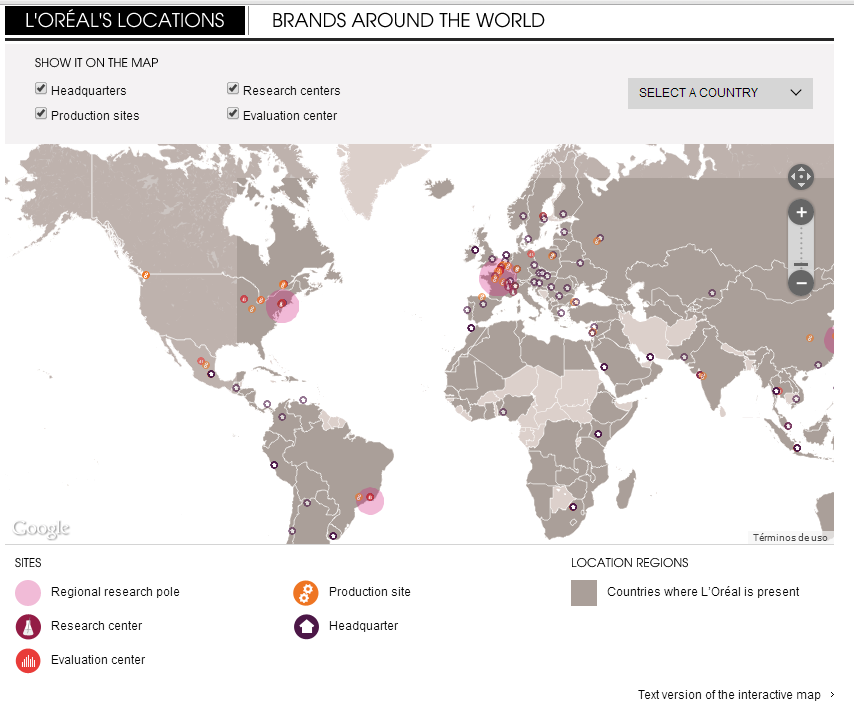 Do you want to know more?

The chain of command in L´Oréal is the continuous line of authority that extends from upper organizational levels ( comittee and borad of directors) to the lowest levels ( interns) and clarifies who reports to whom. For instance, inside the upper levels, the board of directors make the decisions whcih are audited by the comitee and then the one who makes the final decision is the CEO.

So we could say that  authority, which refers to the rights inherent in a managerial position to tell people what to do and to expect them to do it, is practised by those upper levels of L´Oréal. This really, facilitates decision making and coordination, .This managers coordinate and integrate the work of employees, but we can also make a division in here because as L´Oréal is a huge company, it is worlwide, so it divides the authority into the georaphic zones having one manager for each one of them that makes decisions regarding their zone. And inside the georaphic zone we find different divisions of labour such the ones we saw in the map. Depending on which ones are present in each of the zones there would be different submanagers and coordinators with different specialised employees. Those employees assume an obligation to perform any assigned duties regarding their fild of expertise.

This obligation or expectation to perform is known as responsibility. In addition, L´Oréal also include different areas in each of their companies  which are coordinated by managers of that area and in wich we can find lots of young people that interact with different levels of authority including themselves. Those are: Digital; Human Resources; Communication ; Business Development; Sales and Retail; Marketing; Legal; Information systems and technology; Finance; Operations and Research and Innovation.

However, employees throughout the organization can access information that used to be available only to top managers in a matter of a few seconds. Because for L´Oreal si very important to take into account their points of view. That´s why they have jobs such as junior marketing manager, whcih is aimed to young poeple and enables them to participate in the decision making toghether with upper levels. so we could conlude that authority is not extreme but shared.

Make it visual with the span of control!! 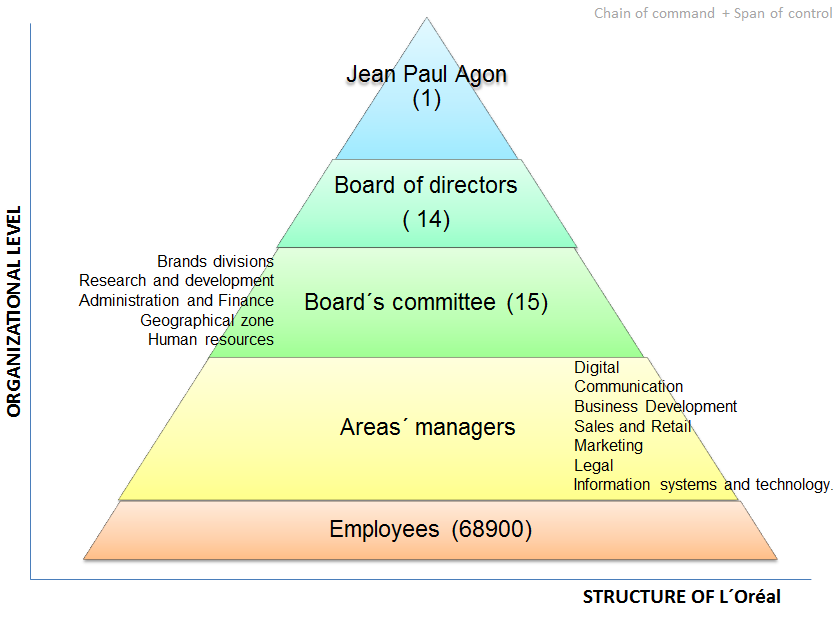 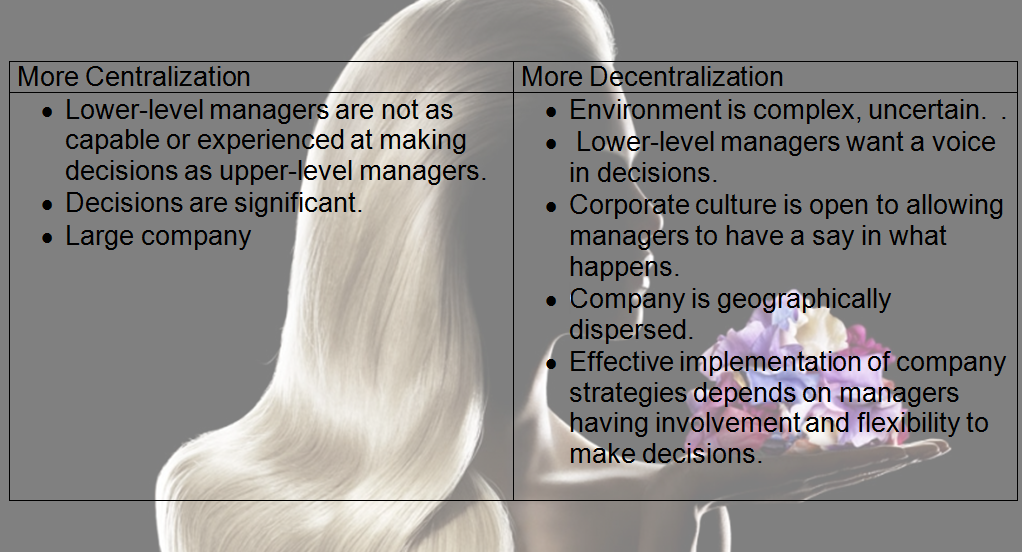 Taking this table into account, we can realize that altough there is clear upper level management and L´oréal is a very huge company there is centralization when taking most important decisions. However , all those decisions are based on analysing all the levels below: their stidies, expertise opinion and decisions. so we can also say that it is decentralized. In fact, the table shows more point for this one.


Evolution of the organizational structure:

In the begining L ´Oréal was characterized by an organic structure because it was bassically Eugene schuller and its laboratory, so there was quite flexibility. Then it started to grow with more scientists till 1956 . In this period L ´Oréal was constructing its model but after this we welcome the expansion of L ´Oréal. consequently, there started to be high specialization, rigid departmentalization, narrow spans of control, high formalization. For instance, in 1964 they bought Lancome. nad in the end, they are nowadays the first in the beauty industry with a lot of brands worldwide. Hence, it presents a mechanistic organization.

Let´s see an example focused on the brands divisions: 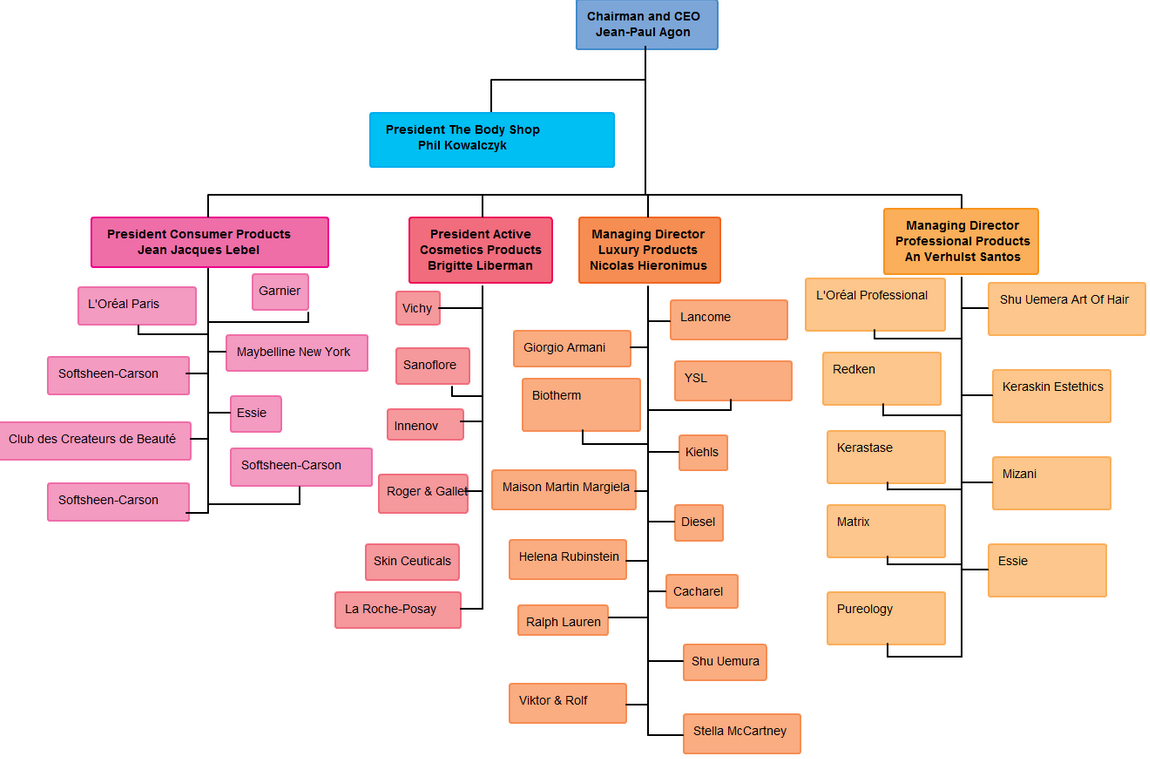 Large French companies, such as L´Oréal bear the weight of this entrepreneurial "counter-culture", (entrepreneriual spirit comes from family and is hard to start up), a phenomenon that is amplified by the size factor and its natural corollary: bureaucratisation. The larger companies grow, the larger their volume of trade, the more structured and rigid their rules and operating modes will become: this means more control and formal coordination mechanisms, which is very visible in L´Oréal.